One of the things I’ve been doing over the last couple of years is scanning loads of old photos and other bits from years gone by! And one of the those things has been old issues of the school magazine I used to produce with Tom, back when we were at secondary school.

One time we ran a competition to take one of the readers to visit BBC Pebble Mill in Birmingham (in all honesty, the main reason was because we wanted to go there ourselves!) One of our team’s dad worked there, so we managed to get her to ask him to take us all, which we did on the May bank holiday in 1986 when there were a lot less people there. Sadly, the studios were demolished in 2005, but back in the 80s they were producing quite a lot of TV – so to someone like me who has always been obsessed with TV and production stuff, it was a dream come true! 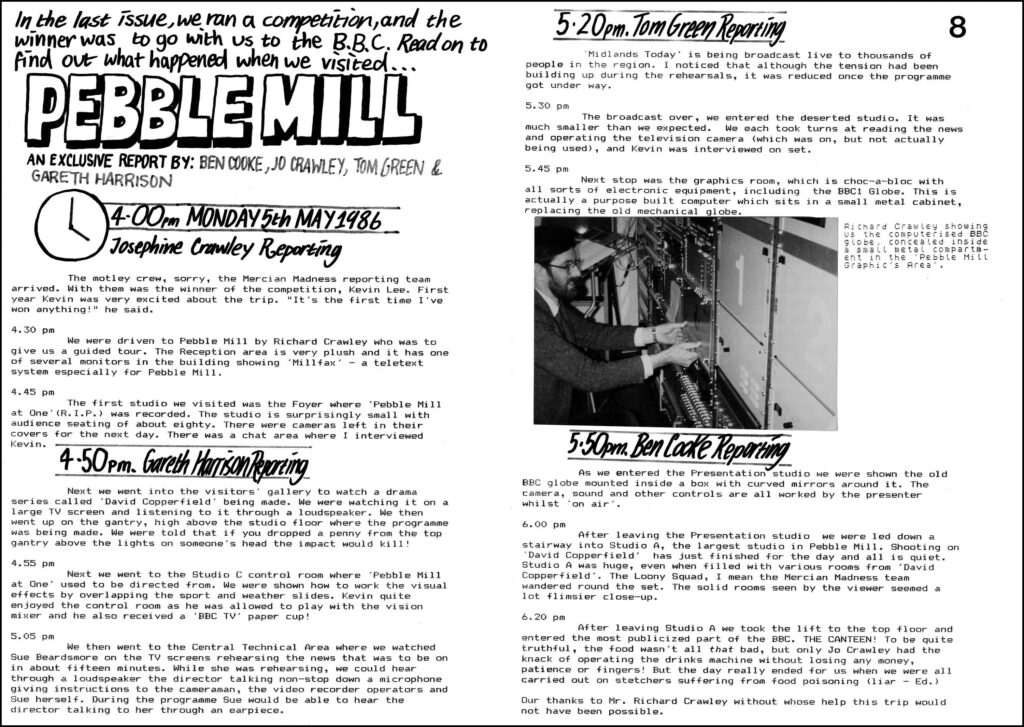 The article in the July 1986 issue of Mercian Madness.

What is quite scary though is that we visited the studios exactly 35 years ago today!

I do have some memories of going there, but after all this time it is a bit hazy. I remember thinking how small the ‘Pebble Mill at One’ studio was, and learning that bits of it were pre-recorded to make it seem like they had more space, and allow them to move stuff around during a show, and also we did try and visit the radio area, but because it was a Bank Holiday Monday, there was no-one working there so it was all locked up. Interestingly, ‘Pebble Mill at One’ was cancelled between us visiting and the article being published, hence the RIP reference!

Also, for some bizarre reason, we wanted to brand Jo’s dad’s car with the ‘Mercian Madness’ logo – but using poster paint! Unsurprisingly, this never actually happened! And I’m quite sad that we didn’t take many photos at all – we did have a camera with us because there’s the photo that’s in the magazine, but for some reason, we didn’t really take any others (or none that came out anyway!)

Here’s the article that appeared in the July 1986 issue of the magazine (remember we were all only 13 when we wrote this!):

In the last issue, we ran a competition, and the winner was to go with us to the B.B.C. Read on to find out what happened when we visited…

4.00pm
The motley crew, sorry, the Mercian Madness reporting team arrived. With them was the winner of the competition, Kevin Lee. First year Kevin was very excited about the trip. “It’s the first time I’ve won anything!” he said.

4.30 pm
We were driven to Pebble Mill by Richard Crawley who was to give us a guided tour. The Reception area is very plush and it has one of several monitors in the building showing ‘Millfax’ – a teletext system especially for Pebble Mill.

4.45 pm
The first studio we visited was the Foyer where ‘Pebble Mill at One‘ (R.I.P.) was recorded. The studio is surprisingly small with audience seating of about eighty. There were cameras left in their covers for the next day. There was a chat area where I interviewed Kevin.

4.50pm
Next we went into the visitors’ gallery to watch a drama series called ‘David Copperfield’ being made. We were watching it on a large TV screen and listening to it through a loudspeaker. We then went up on the gantry, high above the studio floor where the programme was being made. We were told that if you dropped a penny from the top gantry above the lights on someone’s head the impact would kill!

4.55 pm
Next we went to the Studio C control room where ‘Pebble Mill at One’ used to be directed from. We were shown how to work the visual effects by overlapping the sport and weather slides. Kevin quite enjoyed the control room as he was allowed to play with the vision mixer and he also received a ‘BBC TV’ paper cup!

5.05 pm
We then went to the Central Technical Area where we watched Sue Beardsmore on the TV screens rehearsing the news that was to be on in about fifteen minutes. While she was rehearsing, we could hear through a loudspeaker the director talking non-stop down a microphone giving instructions to the cameraman, the video recorder operators and Sue herself. During the programme Sue would be able to hear the director talking to her through an earpiece.

5.20pm
‘Midlands Today’ is being broadcast live to thousands of people in the region. I noticed that although the tension had been building up during the rehearsals, it was reduced once the programme got under way.

5.30 pm
The broadcast over, we entered the deserted studio. It was much smaller than we expected. We each took turns at reading the news and operating the television camera (which was on, but not actually being used), and Kevin was interviewed on set.

5.45 pm
Next stop was the graphics room, which is choc-a-bloc with all sorts of electronic equipment, including the BBC1 Globe. This is actually a purpose built computer which sits in a small metal cabinet, replacing the old mechanical globe. 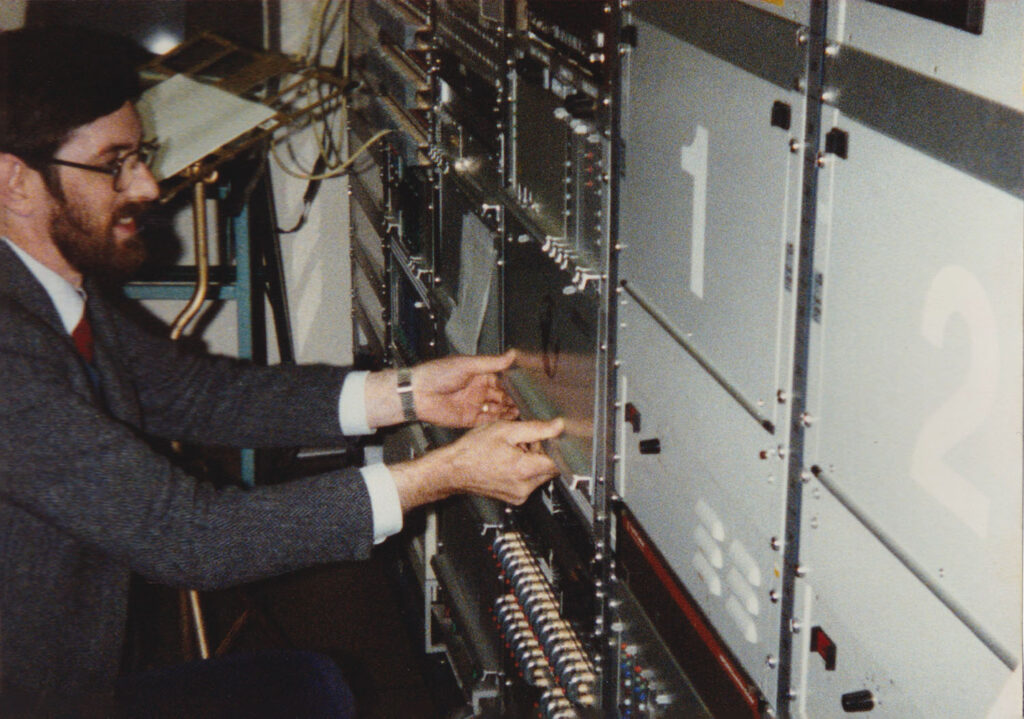 Richard Crawley showing us the computerised BBC globe, concealed inside a small metal compartment in the ‘Pebble Mill Graphics Area’.

5.50pm
As we entered the Presentation studio, we were shown the old BBC globe mounted inside a box with curved mirrors around it. The camera, sound and other controls are all worked by the presenter whilst ‘on air’.

6.00 pm
After leaving the Presentation studio we were led down a stairway into Studio A, the largest studio in Pebble Mill. Shooting on ‘David Copperfield’ has just finished for the day and all is quiet. Studio A was huge, even when filled with various rooms from ‘David Copperfield’. The Loony Squad, I mean the Mercian Madness team, wandered round the set. The solid rooms seen by the viewer seemed a lot flimsier close-up.

6.20 pm
After leaving Studio A we took the lift to the top floor and entered the most publicised part of the BBC. THE CANTEEN! To be quite truthful, the food wasn’t all that bad, but only Jo Crawley had the knack of operating the drinks machine without losing any money, patience or fingers! But the day really ended for us when we were all carried out on stretchers suffering from food poisoning (liar – Ed.)

Our thanks to Mr. Richard Crawley without whose help this trip would not have been possible.