A couple of weeks ago I was on holiday in Ireland again, meeting up with mum and my niece and nephew. They’d already been there for a few days, and I set off really early on a Sunday morning to make a 9am sailing from Holyhead to Dublin, followed by a 3½ hour drive across the country to Mai & PJ’s house just outside Listowel.

The following morning – we took my mum’s hire car back to Shannon airport, with me following behind, so we could then carry on in just the one car.

We carried on northwards for a bit, before making a brief stop in County Clare’s main town, Ennis, and then carried on to the north west of the county, finally arriving at the Cliffs of Moher. 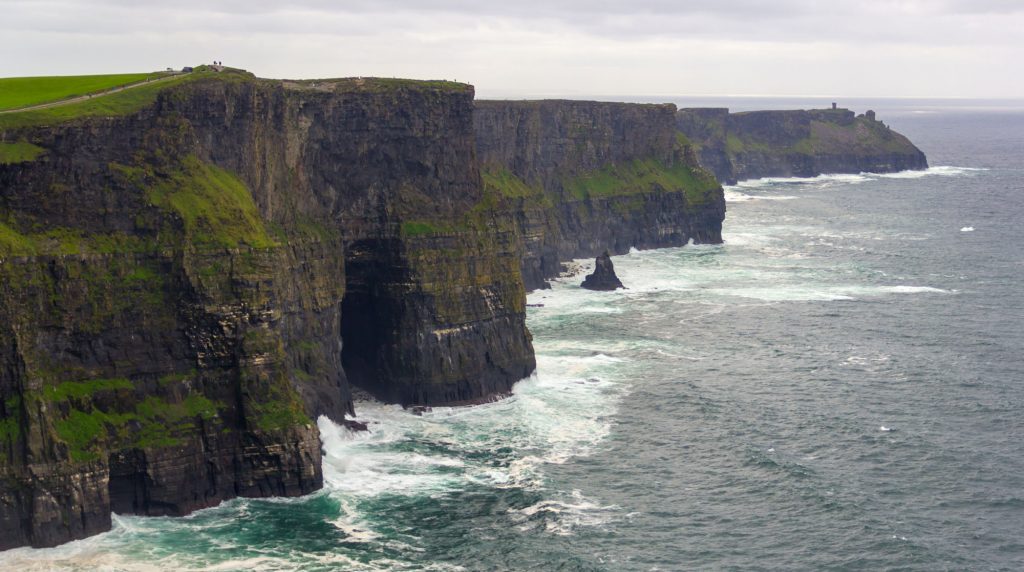 They’re really stunning, and you can really sense the power of the sea crashing onto the rock a couple of hundred metres below. It was really windy, and it had been quite drizzly all morning, but it did dry up for us whilst there. It was a pretty strenuous walk up a load of steps to an old round tower overlooking the sea, and we carried on walking along the cliff top until we got to a little hut selling ice lollies (which of course we partook in!).

It was crazy seeing the amount of people who’d left the path to position themselves really precariously on the cliff edge to take a selfie – I’m not sure any photo, no matter how stunning, is worth potential death!

Afterwards we went into the visitor centre, which seems to be a giant cave inside the hill, and there were quite a few interactive things which Brandon & Chloe could have a go at. Even mum decided to try out the greenscreen selfie area, although the camera they use is really low quality and the keying wasn’t that great! 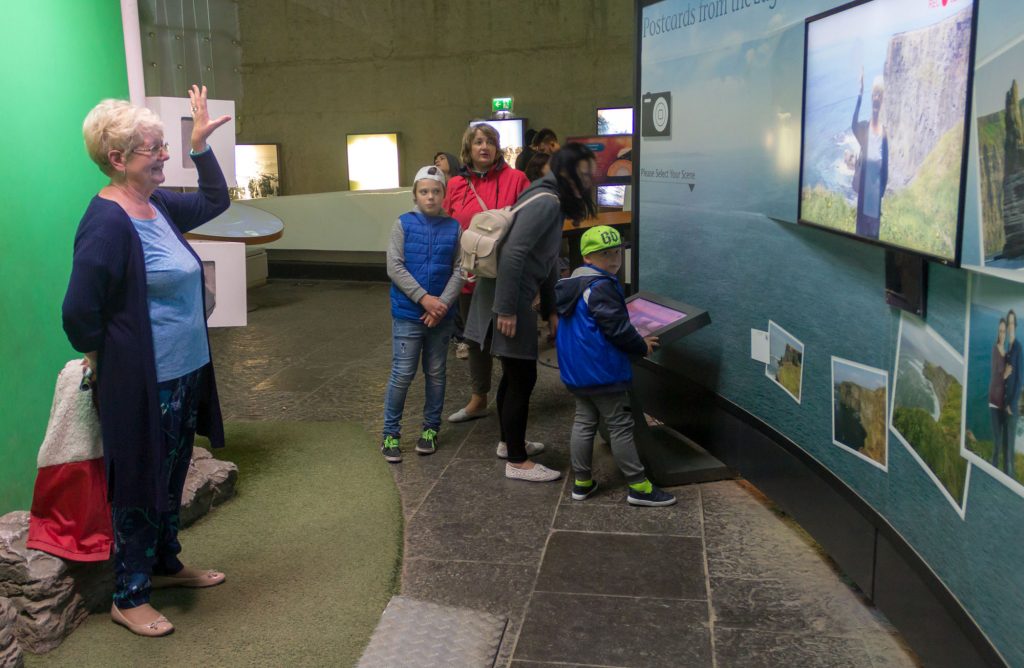 From the cliffs, we drove along the coast, past Donald Trump’s golf course and hotel, then made a quick stop in a small seaside town called Kilkee so the kids could use the loo, and spent about 15 minutes on the beach stretching our legs. A bit more driving took us to Killimer, where we then caught the ferry across the Shannon Estuary to Tarbert, before the final stretch back to Mai & PJ’s house. 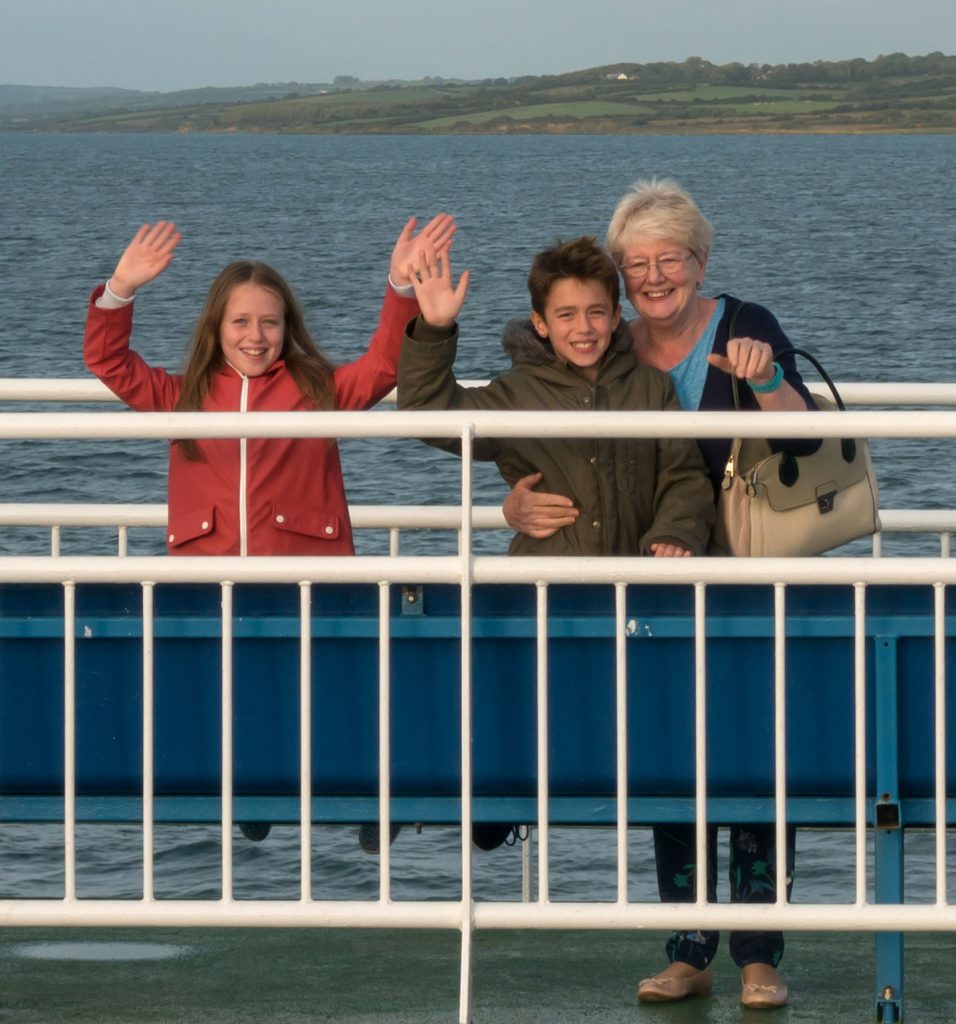 Tuesday was quite a grey day, so we mostly stayed at the house, but in the afternoon drove down to Tralee, with a visit to Dunnes, ended then onto Penneys, where mum and Chloe spent ages looking at clothes, whilst me and Brandon just got bored!

The following day, the sun came out, so we went over to Ballybunion, and to the kids’ playground above the beach. Even though it was nice and bright, it was pretty cold because of the wind coming off the sea. We then walked down to the beach and managed to find an area that was quite shielded from the wind. 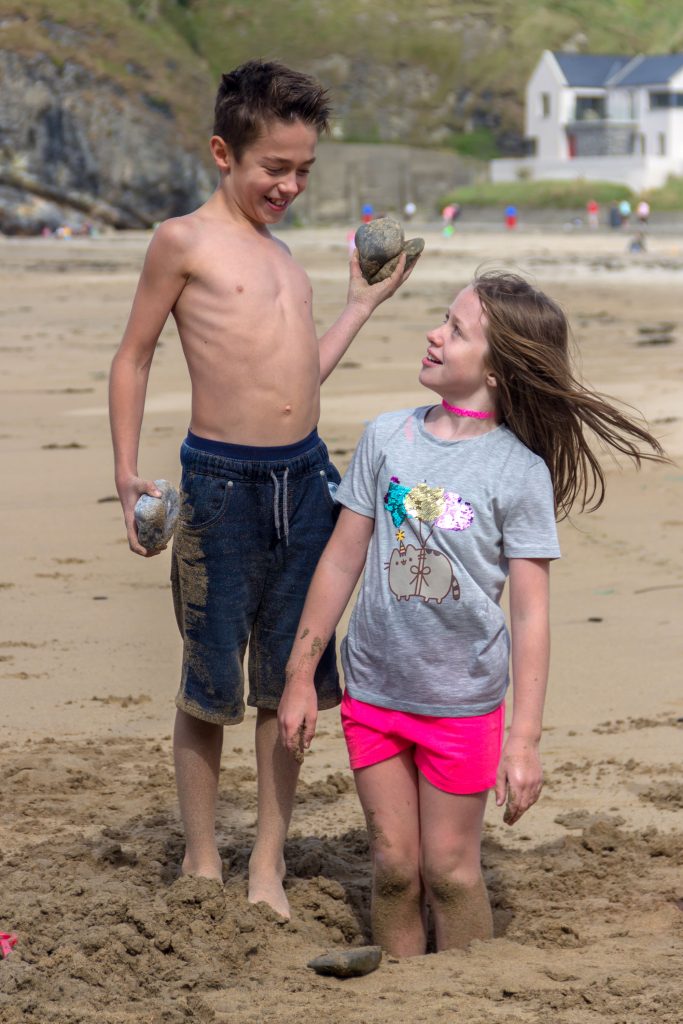 We hadn’t actually planned to go down to the beach that day, so they’d not got a change of clothes with them, and we made the mistake of going for a paddle in the sea – Brandon & Chloe were both wearing shorts, and I rolled my jeans up, but we all got quite wet, and then when they played in the sand, it stuck to their wet legs and clothes!

On Thursday, we drove down to Tipperary, which is where Grandad Maher grew up. We stopped in a small town called Fethard, and had lunch in McCarthy’s, which is a pub, restaurant and undertakers! Mum told us that she’d stayed there as a kid, because it used to be a hotel as well, and she’d gone there with nan and grandad on holiday! Apparently the interior still looks pretty much the same now! 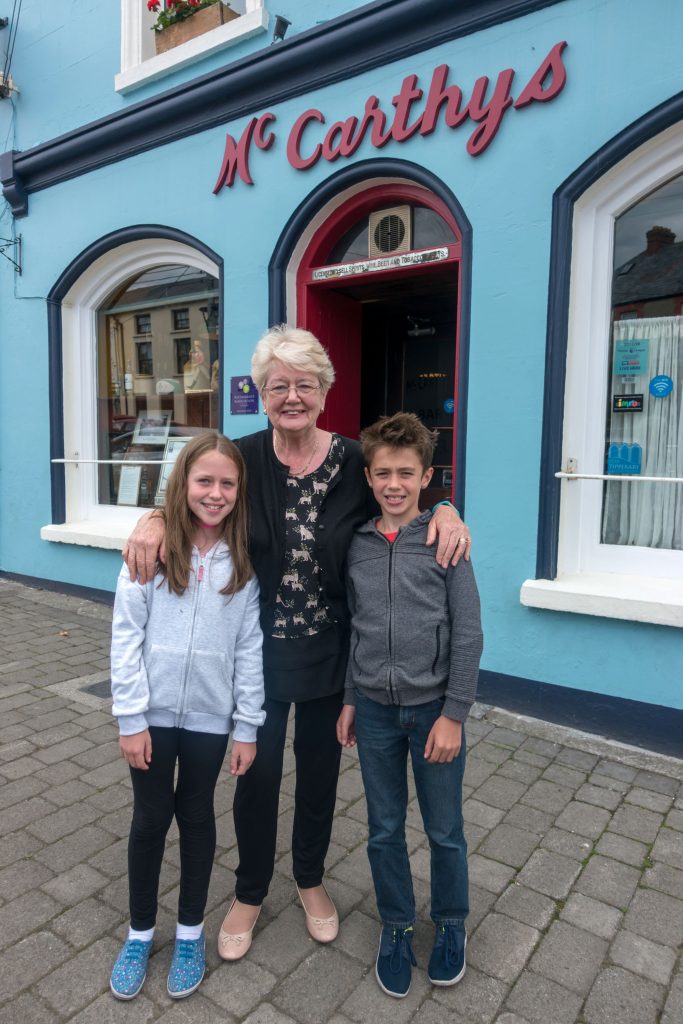 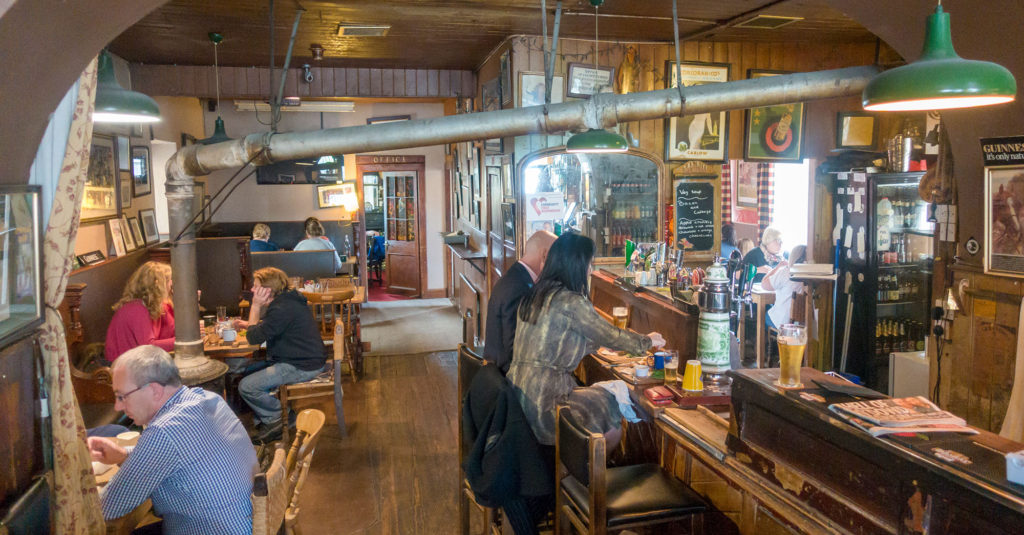 After a really nice lunch, we took a short drive and found Grandad Maher’s old school in a tiny village called Cloneen, and then drove to the house he grew up in! Mum had met the owners on a previous visit, so they knew we might be turning up during the week, so I got to go inside and look at some old photos they had. It was really fascinating, and it felt a bit like being on ‘Who Do You Think You Are’! 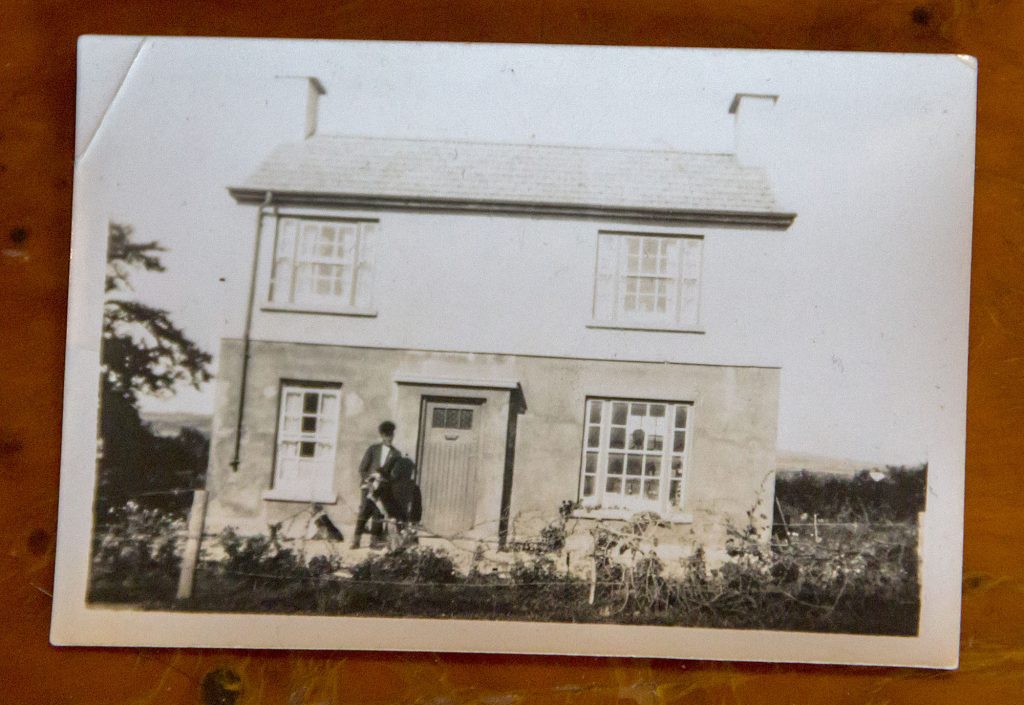 We drove back from Tipperary, and went straight to Tom’s house, which is the farmhouse that we stayed in when I came to Ireland as a kid in the 80s. My mum had asked him not to go to any effort because we’d already had a main meal, but with typical Irish hospitality, had laid out a massive spread of food – but there was no way we were going to get through it all!

Next day was a bit of a chill-out day – the weather was a bit mixed so we just hung out around the house and did a bit of shopping in Listowel and Tralee.

On Saturday, the sun came out again, so we took advantage of the the good weather and made it a beach day! The kids took surfboards out with them and spent a lot of the time lying on their fronts allowing the waves to bring them back to the beach. They’re not quite standing up on them yet though!! 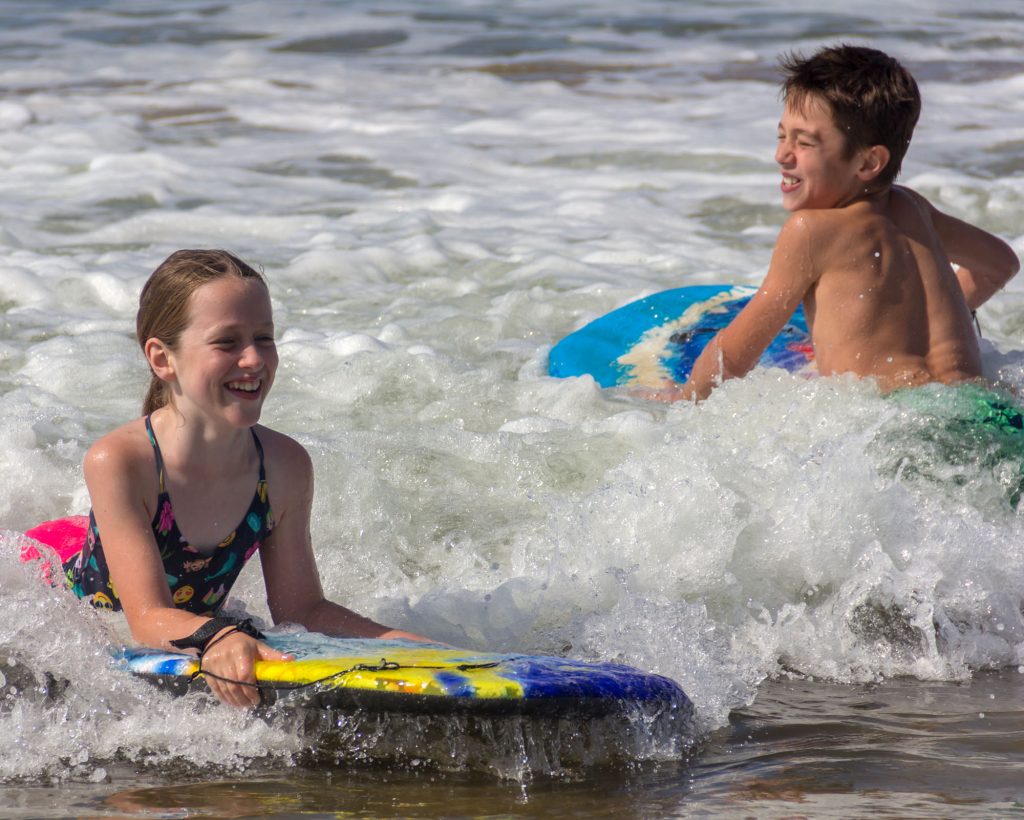 Then in the evening, we went back to Ballybunion for a walk along the cliffs, and the views were absolutely stunning! Being further west, it meant that sunset is about an hour later than at home, so the sun was slowly setting throughout the walk, fully setting just as we got back to the car. 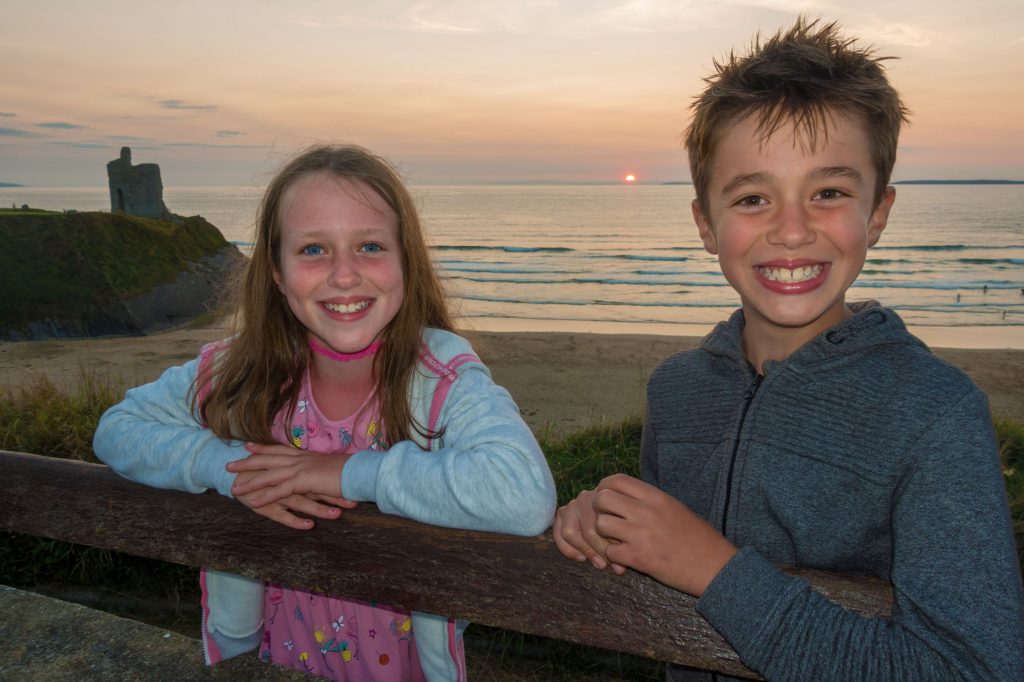 Sunday was a bit like something from Mission Impossible! It was Mai & PJ’s 40th wedding anniversary party, and Tom had arranged a surprise meal with all their friends at Eabha Jones restaurant in Listowel. There was no way they’d have gone if they’d known, so we had to insist that we were going to take them for Sunday lunch, and acting surprised when we discovered it was their anniversary! And then, we had to make sure we didn’t arrive too early, which is more difficult than it sounds! Anyway, it all went off without a hitch, and they genuinely were shocked to see everyone there (but shocked in a good way!).

Then this week, it’s been busy. On Wednesday night, I went to see Dave Gorman’s latest show at The Lowry, and it was so good. I really like his style of comedy – his ‘Modern Life Is Goodish’ series was genius – and his live show is more of the same! And that giraffe joke… hilarious!

Then straight after the gig, I had to go to the office to load up my car with kit, and then drive up to Darlington (eventually getting to bed around 2am!) ahead of a shoot the following day!

We were filming with presenter Gethin Jones for Swinton Insurance, with a stunt driver, and it was good fun (although quite intense to get everything done in time!). The final links were being shot as the sun was beginning to set – I’m hoping those shots don’t look too different to all the others! 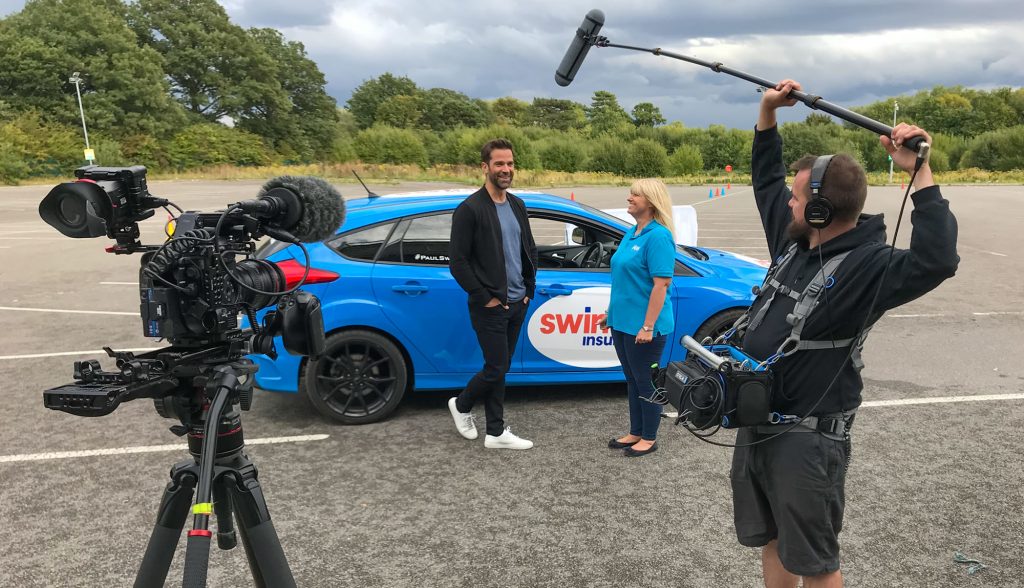