…for someone to have maybe mentioned it to me before today, rather than me finding out by accident.

Yep, it’s my birthday, and it’s not something I really want to celebrate! There’s nothing great about getting older – you’re basically running out of time to accomplish the things you always hoped you’d do, and the likelihood of them happening just gets less and less.

Anyway, in true tradition I’m spending my birthday working late in the office… we’ve got a job that needs to be finished for the morning, so I’ve got to stay until it’s done, and might be a few more hours yet.

To be fair, as a kind of birthday treat to myself, I’m off to see Delirious play in Liverpool on Wednesday night – it’s their last UK tour, so I’m hoping it’s a really good gig. I first saw them live back in 1995, and have seen them many times since then, so will be weird knowing it’ll probably be the last time.

It’s a year today that my dad died, and if I’m totally honest, I still don’t think I’ve properly felt anything abut it. I commented after the funeral that I hadn’t really had much of a reaction to it all, and maybe it’d come further on, but it hasn’t really. Maybe that makes me heartless – I don’t know. But maybe now isn’t the right time, and it’s still something I’ll deal with in the future.

Also, nan’s been taken into hospital this weekend, and I’m not sure what’s going to happen with that. When I first found out on Thursday, it sounded like it was really bad and everyone was fearing the worst, although mum’s texted me today to say that she’s improved, and is now eating and drinking (she hadn’t eaten in a week before being taken in), but they don’t know whether she’ll be allowed home or not. I guess it’s just a case of waiting really.

Been a bit of a gap since my last post, so need to do a bit of a catch-up!

Firstly, tonight on G.O.L.D. (it used to be UKGold until this week!) there’s a documentary about one of the funniest shows ever – “Blackadder Exclusive: The Whole Rotten Saga”, and we did the graphics for it.

It’s on at 9pm (and I think is repeated throughout the week, as is the way with digital channels), although there’s another show next Thursday night at 9pm called “Blackadder’s Most Cunning Moments” where we provided a lot more graphics, as well as doing the background images for the interviews.

It’ll be quite strange seeing it, because we were working on it back in May and June, so seems like ages ago now! I won’t forget it though because it coincided with James’ paternity leave, and the week it had to be delivered I was juggling that along with the Drama Trails 3D stuff! Fun! The programme was originally going to be aired in the summer, but then it was decided that they’d save it for the channel relaunch which happened this week, hence the gap between working on it and it now being shown. I’ve watched some of it on DVD, and they’re actually really well put together shows, so hopefully the viewers will like them! 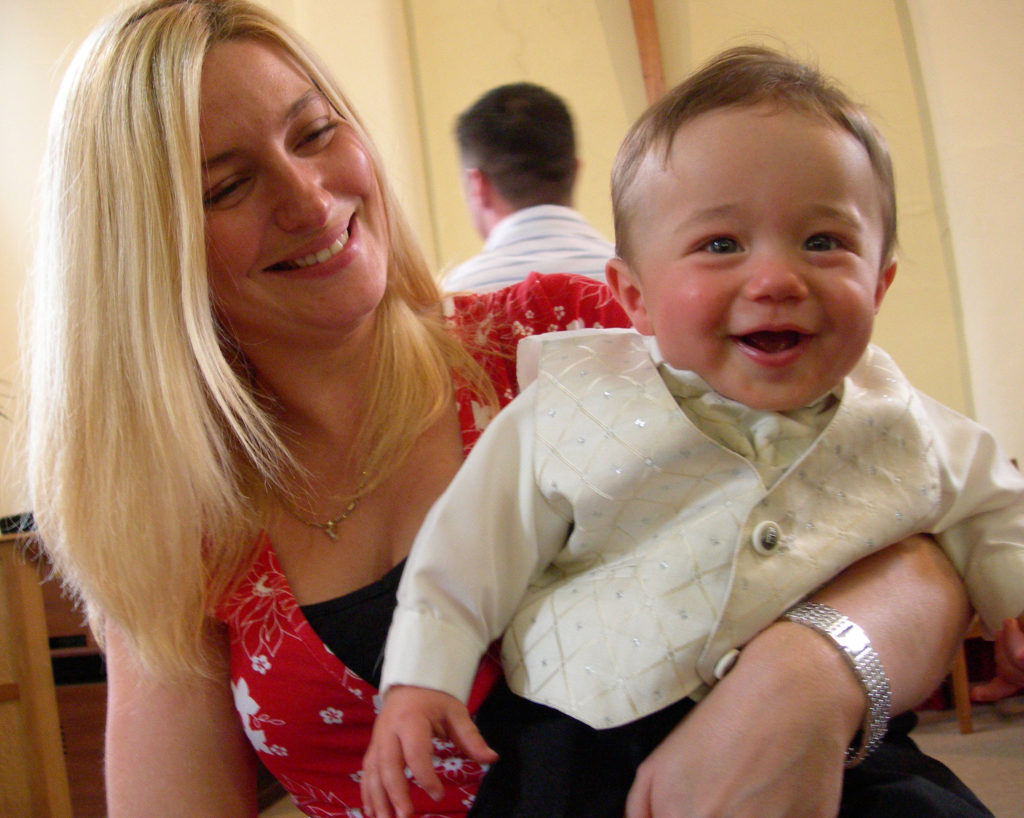 Other news… a couple of weeks ago I was down in Tamworth for Brandon and Chloe’s dedication service.

They looked cute – Brandon had a little suit with a waistcoat and cravat, and Chloe was wearing a dress with little flowers on it, and a sparkly headband!

They were really well-behaved and seemed to enjoy themselves, although Brandon does manage to be sick at pretty regular intervals!