Wow – I can’t believe so much time has passed since I last blogged on here!

It’s been quite a busy summer – I’ve just got back home after being away working for a couple of weeks down at Soul Survivor. I spent 10 days in the Underground venue doing visuals for the venue, so spent most of the time either down the side of the stage or in our make-shift edit suite! This year I had Tom Steward helping me – it was pretty last minute because both Andy and Kate weren’t able to come this year – but I was really impressed at how quickly he picked it all up, and the stuff he was shooting on stage every night was brilliant.

Some of the video features we did can now be viewed on Youtube so check them out!

So we finished there on Thursday morning, and then I headed up to Bristol to meet up with Ali, and on Friday went with her and some of her friends to Greenbelt. 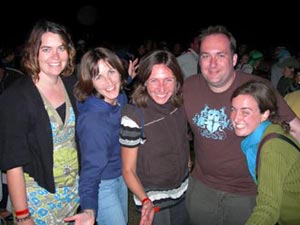 It’s the first time I’ve ever been to the festival, though obviously I’ve heard lots about it over the years! It’s very different to Soul Survivor – much more of an arts festival – and in some ways I found a lot of stuff really watered down, although there was a lot of passion for environmental issues and the like, which isn’t a bad thing. It’s quite a political event really, and the bands that appear are from a really wide spectrum – from Delirious and Matt Redman to Chas & Dave!! Not sure whether I’d go again, but I’m glad I checked it out.

Work news – me and James are now officially joint directors of doodledo MOTION Ltd which is pretty exciting! We got all the stuff finished for the BBC2 series ‘British Film Forever‘ though it went on a bit longer than we expected – we thought the edit would be finished at the end of July, but James was still having to render graphics whilst I was at Soul Survivor! It was a good job for us to do because it was quite high profile – they even advertised the programme on a big board with some of our graphics on the front of the BBC building on Oxford Road! I think all the stuff we did looked really good when seen in the context of the whole show, and it’s a good job to stick in our portfolio! 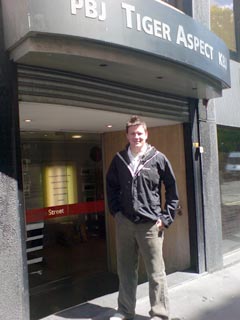 We’re now working on some titles and programme graphics for a ‘Vicar of Dibley’ special going out in October on UKTV Gold. It’s basically a showcase of the 40 funniest clips from the series with interviews from the cast and celebrity fans.

We went down to Tiger Aspect in London back in July to meet with the production team, and the meeting went really well, and hopefully we should be able to deliver some really good work. The plan is that we’re going to do background images for each of the interviews, plus animated stings to introduce each of the clips. There’s been talk of us doing some titles as well, but I’m not sure what’s happening with that yet… we’ll probably find out last minute!!

We’ve got some other work lined up as well, so hopefully we can make a real success of the new business. It’s going to be hard work, but I think me and James work really well together, and it’ll be good to focus our efforts in building the brand and expanding what we do. Watch this space!

Oh, and after a lot of phone calls and form filling, I managed to get my money back after the betting incidents… going to be checking my bank statements a lot more regularly from now on!