Thought I’d better do an update for February considering it’s the last day of the month!

Anyway, I’ve been really busy with work, and a lot of my time has been taken up with working on ‘The Soul Shutter‘ (notice there’s a ‘The‘ there now… I only discovered that after doing the opening titles!) I think I’ve now finished with all the CG work – there’s a meeting that Hamish and Rob are going to on Thursday to get feedback, but to be honest, I don’t really have any more time to work on it, and I’ve already put hours more work into it than I originally thought I’d have to. It’s fine because it does look really good, but they’re getting a really good deal!

Went for another bike ride with Jamie on Sunday afternoon which was good. We rode along the Longdendale Trail which is a route that goes runs alongside 5 reservoirs and follows the old Manchester to Sheffield railway line, and in all we did 14 miles there and back!

I really enjoy going out on the bike, though I need to get some proper cycling shorts to wear under my trackie bottoms because I got quite sore from the saddle! It’s cool spending time with Jamie as well ‘cos we don’t get to catch up that often.

At the beginning of February, me and James went down to London for a couple of days to attend this year’s Video Forum event which was really good. Got to go to a few good production seminars, and saw loads of kit I’d like to buy! Did actually spend a bit of cash buying a better head for my tripod and a remote zoom unit for my camera which should be useful. 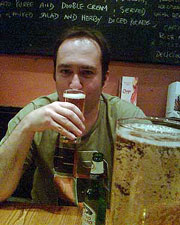 We stayed in a Travelodge in the city centre, and the room wasn’t the greatest! It had a double and single bed with probably the worst mattresses in the world (I went for the single because it seemed slightly better!), only 3 of the 5 lightbulbs worked, and the walls and ceiling were covered in Artex which game the room a distinctly 70s feel! In the evening we went out for a meal at a restaurant in Kings Cross, and I had my first lager (a couple of bottles of Peroni on James’ recommendation), and it was very good!

It’s kind of weird because obviously I’ve never really drank alcohol, but this year I’ve decided to start to do so (responsibly of course!)… my reasons for not drinking before have always been about not wanting to lose control, but I came to the conclusion that at end of the day, whether I get myself into that situation is of my own making, and by having a drink every so often doesn’t mean that I have to give up any control of myself! Though the next night we met up for a meal with Cathy and Frank and I had a pint and a coffee with a double Baileys in it(!) so it may look as though I’ve become a hardened drinker all of the sudden, but I was able to still walk in a straight line afterwards!!