Well almost… I’ve got a job in the morning but I’ll forget about that for now!

I’ve just got back from the Sports Bar in Manchester where there was a big gathering to watch the Cannonball documentary go out on ITV1 tonight. The sound in there was really crap so it was hard to hear a lot of the speech in it (although I now know it all word-for-word!), but everyone really seemed to enjoy it. For some bizarre reason I got a bit nervous as we were waiting for the news to finish, and when it finally started I was quite relieved that we’d finally got it to air! I know I’m always over-critical of my work, and there were things that I could see that I probably would have liked to change a bit, but maybe I need to chill out a bit more and accept compliments from people… something I really struggle with to be honest. 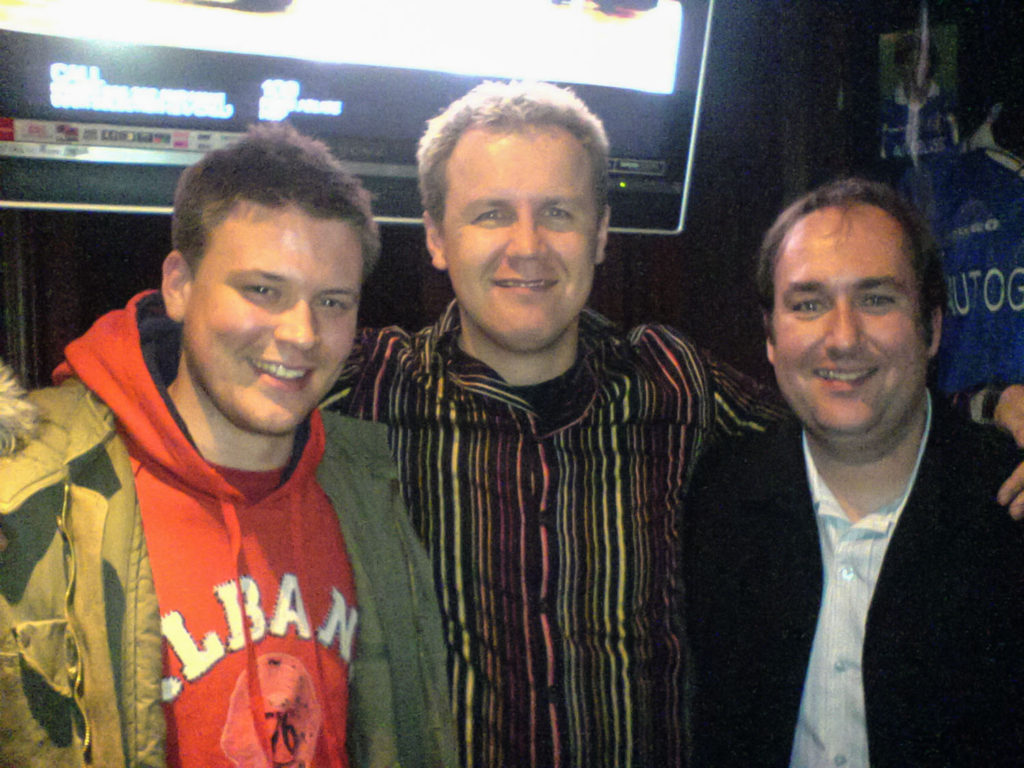 James, Rob and me.

James arrived for the last 20 minutes of the show which was cool (I didn’t think he’d be able to make it because he’d had a few late nights and didn’t want to disturb Helen when he got home, but he came straight from a Sheffield Wednesday match so would have got in late anyway!!) He did the title sequence for the programme, and I think he’s done an amazing job on them. I was originally supposed to be doing it, and had laid out the shots to the music, but realised I wouldn’t have time to do a decent job on them, so I basically sub-contracted them to James! And what he did with them was loads better than I would have done – he’s really hot with Flash animation and had used that to create some retro animated backgrounds. I’m so glad that I’m doing more and more work with James because he’s incredibly talented, and I think we make a good team because we seem to compliment each other with our skills, and I reckon we could do some really great stuff together. Anyway, that’s enough of the back-slapping – obviously a bit tired and emotional! It was a good evening, and Rob was really pleased with the final programme… I’m looking forward to hopefully working on more of his shows in the future.

END_OF_DOCUMENT_TOKEN_TO_BE_REPLACED

I’ve been out to buy a copy of this week’s Radio Times, and that’s something I normally only do at Christmas…

…but the reason for purchasing one this particular week is because if you turn to page 94 and look at the ITV1 schedule for Tuesday 28th November, there’s a listing for the Cannonball show – woo! 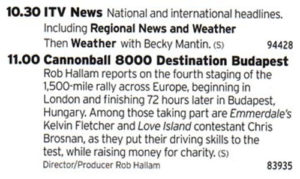 They’ve actually done a pretty decent write-up in there as well. Rob originally wrote some copy to send out to the listings magazines, but often stuff like that is edited right down to the bare minimum, but I think the show looks quite prominent here. Hopefully it will get lots of viewers because there’s not that much up against it really. We’re going to be watching it at the Sports Bar in town with the rest of the crew, and some of the guys who appear in it. It’ll be quite weird because it feels like I know a lot of them having watched them solidly on it for the last few weeks!

Well I’m in bed typing this post on my new MacBook Pro.

I finally succumbed to the world of Apple and ordered the newly released Mac laptop and it finally arrived this morning! I’m trying to get used to using the keyboard and trackpad… it’s quite different to my desktop and I keep hitting extra keys and it makes me look like I can’t spell anything!

Anyway, my other computer is currently rendering the grading for the Cannonball documentary and when all that’s done I can re-import it and then put it onto tape to send off to ITV. It’s really cool working on something that’s going out to such a wide audience. It’s on ITV1 next Tuesday at 11pm, and then will be repeated endlessly on Men & Motors – though to be honest I’m more excited about the national ITV showing!

Other stuff – went to see ‘Casino Royale’ on Saturday night with Jamie, Sean and Selina, and it was really good.

It’s only the second Bond film I’ve seen, the other being ‘Die Another Day’, and this was a really good action film, but I think I preferred some of the tongue-in-cheekness of Brosnan’s Bond. Beforehand we went round the Christmas markets in Albert Square, and had a hot pork roll from a stall with a whole cooked pig on the counter! Was a really fun night, and I know I need to do more stuff like this, otherwise I’m going to end up turning into a total recluse who just works all the time!

…although it certainly feels like it! I’m basically spending most of my time at present editing the Cannonball 8000 documentary which is on ITV1 at the end of the month. Very long days, but it’s looking really good, and hopefully people will really like it.

Anyway, I have managed to do a couple of sociable things this week as well. On Sunday afternoon I went up to Middleton to do a bit of babysitting with Sarah… she was looking after Grace (who’s one next week) whilst Colin & Caroline took Olivia to see a kids musical, so I went along probably more to keep Sa company that be much use otherwise! Grace was asleep when I arrived so we watched a bit of TV (the Top 20 Boy-Bands(!)… worryingly I did know most of them, but at least I wasn’t the one who knew all the words to the songs… hehe) and then when Grace woke up I helped keep her entertained with a toy shark and a beaker of water!

It was good fun actually – I managed to steer well clear of the nappy changing… I don’t know how I’d ever manage to do that, but maybe if I have my own kids it would be a lot easier!

Then when I got back home, I got a call from Jamie asking if I wanted to go to the cinema – but they were already in the queue, and the film was starting in 15 minutes, so I had to move quickly to get there in time! Anyway, I managed to get there with a couple of minutes to spare, and found Jamie who was with Dean and Sean, and we went in to see ‘The Prestige‘ – a film about two rival magicians… I hadn’t heard anything about it beforehand, but I thought it was pretty good, although you had to suspend your disbelief to get over a pretty major part of the plot!

Then on Tuesday night, I went round for a meal at Jamie’s house. I had expected that we were going to go out and grab something to eat in town, but it was a really nice surprise to find he’d cooked, and that we were also being joined by Sean, Celia and Sarah.

My fussy eating kind of made an appearance – Jamie had done rice with the chicken, but he suddenly remembered that I’m a nightmare to cook for, and I told him I didn’t mind just having it without, but he rustled up some mustard mash for me instead! And the main part was something I wouldn’t normally have had – he’d done the chicken in a slightly curried crème fraîche sauce, and although I did pull a bit of a face when I took the first mouthful, I did actually quite like it! Maybe this is another small step on the road to eating the same food as everyone else!!

Just thought I’d do a quick catch up blog because I’ve not posted since my birthday last month. It’s been really busy this last few weeks… in the last 14 days I’ve worked 128 hours, and I’m about to go out and do some filming for Channel M tonight which means I’ll probably be working until about midnight! I’m actually the busiest I’ve been so far… due to deadlines and stuff I managed to do a 36 hour day this week! I got up at 8am on Sunday to start work for 9, then worked straight through until 7pm on Monday night – finally getting to sleep about 8pm… I reckon Monday was probably the worst day of editing I’ve ever done!

I went to see Delirious at the Apollo on the Friday after my birthday, and it was excellent! I went with Sa, and we met Caroline and Colin beforehand, and I also bumped into a few people I hadn’t seen in quite a while. Tim Hughes opened the gig, and although he was potentially an odd choice for a support act, he went down really well with the crowd. Then Delirious came on, and they played mostly stuff off Mission Bell, but did throw some older stuff into the mix as well. It was a great gig – and they made extensive use of visuals as well, although at times I did find them a bit distracting, but that could have been because I was thinking how I’d have done a couple of them better! I just can’t switch off!

Then last night I met up with Craig who I used to work with at MUTV, and who left to work at the CITV channel around the same time I went freelance. He’s just found out he’s being made redundant so wanted to meet up to ask about going freelance and stuff. Not sure if I was any help really, but it was cool to catch up!