Lots of apologises are in order! It’s been over a month since I last blogged (and I had wanted to post more on here) and also I’ve got quite a few emails from people that I need to reply to that I haven’t had a chance to yet… sorry to all those people! Will reply soon!

I’m so busy at the moment it’s unbelievable. In fact, I’ve probably taken on a bit too much to be honest, but there’s nothing I can really do about that now… I’m currently working on 6 different jobs that all seem to have delivery dates within a few weeks of each other! This week is a pretty mad one… Monday I was editing a documentary on this year’s Cannonball Run for ITV1, and then yesterday I was filming for a safety video at Leeds Bradford airport – although it took us 5 hours to do the 60 mile journey!! We left Manchester at about quarter to eight, and came to a standstill on the M62 at 8.40am, and stayed parked there for over 3 hours!! There’d been an accident about a mile ahead of us, and we were stuck there until just before midday when they finally managed to clear the carriageway.

Then today I’ve been filming stuff for Preview with James – the bizarreness of this job is one day you can be filming airplanes in the fog, then the next day we’re animating vinyl stickers on a wall, and then filming the baking of a cake in James’ kitchen as a stop-frame animation to make it go from the finished cake back to it’s raw ingredients! 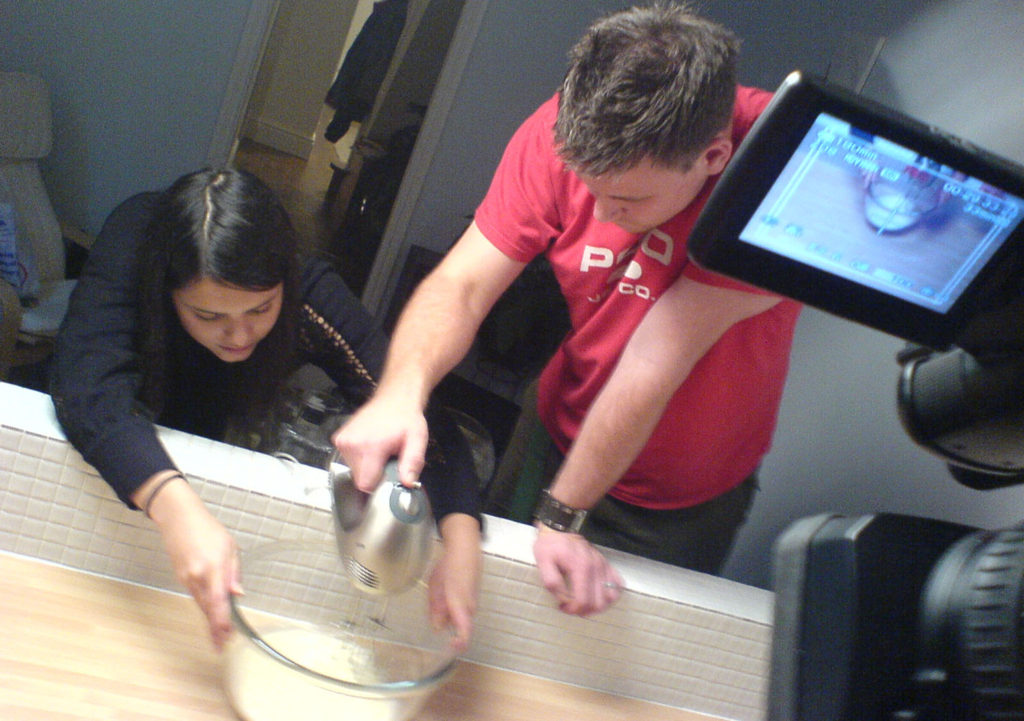 I think it should look pretty good, though we ran out of time this afternoon because we both had to head to a meeting at Channel M, so we’ll need to shoot the filling and topping going on at some point… just not sure when yet!! Tomorrow morning I’m back up in Bradford to do some more airport filming (this time we’re leaving at 7am – woo!), and then tomorrow night I’ve got to drive down to London for a shoot in Docklands, and then I’m back in Manchester on Friday night, with a day’s work on the Cannonball waiting for me on Saturday!! And then I’m booked solid with stuff for the next few weeks! Arghhh! I suppose I should be thankful I’m getting regular work, but I really could do with a bit of a rest.

I’ve been trying to get in a couple of social things recently because my life has been so taken up with work recently. This evening I met up for a drink in town with John Cieszynski – we had planned to go to Jabez Clegg on Oxford Road, but I hadn’t realised there was internation football on tonight, so it was incredibly busy there, so we ended up at Dukes in Castlefield, which was a lot quieter. It was the first time I’ve really spoken properly to John – we’ve spoken loads on Messenger, but nothing really outside of that! It’s mad really how you can live so much of your life online!

And on Monday, Sarah came round for tea and showed my all her photos from her holiday to South Africa – and it looked totally amazing. It’s been so long since I’ve had a holiday, and I’d love to do something like that, but the opportunity never seems to materialise.

Anyway, it was good to catch up, and I cooked a mean roast chicken meal and even made a sauce rather than my usual safe option of just mixing up some gravy! Not sure if I did it right – the sauce tasted okay I think… I had to get some white wine to make it, and not knowing anything about wine, I don’t know if it tasted good or not! But I liked it, and hopefully Sa did as well – or she was just far too polite to say otherwise!!

Right – I should really be getting to bed because I’ve got a looooong day tomorrow. Will try to blog more regularly once the workload’s gone down a bit!