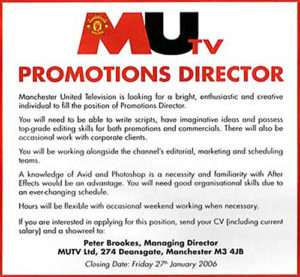 Was doing some freelance editing at Channel M, and they had a copy of Broadcast lying around (a tv industry newspaper), so I flicked through to the jobs section and the first one in there was for my old position at MUTV! I had heard that they were going to advertise in there, but it was still weird seeing it in there! Actually reading it, it makes what I used to do sound quite professional!

Anyway, as I said I’m doing a few days work for Channel M this week – it’s weird with freelance… up until Friday lunchtime, I had all this week off but now I haven’t! I’ve got a 7am start there tomorrow

so I probably do need to get to bed pretty soon!

Also, I put my new freelance website live tonight – www.garethharrisonproduction.com – it’s not flashy at all, but I think it does the job I want it to.

And me and James finished the IR Awards sting last Thursday – due to the tight deadline and because we started it over Christmas, the first time they saw any of it was actually last week, so it was quite a relief to hear on Friday that they seem happy with it. I think we did a pretty good job to be honest considering we did it all in 3 weeks – less than half the time we had to do last year’s! You can see what the finished piece looks like here.

I designed myself a business card late tonight and uploaded it to a website to get a load printed, with the more expensive option of a glossy front. However, I just looked at it again, and noticed I’ve made a mistake with my phone number, so I went to the site to make the alteration, only to discover there is no way to change the order or even cancel it.

So I’ll have 500 business cards arriving through my door soon, and they’ll heading straight into the bin… great.

Stayed in bed for most of today! I was so tired because this weekend we were filming our ‘Enemy Of The State’-inspired shots for this years IR Awards opening video. 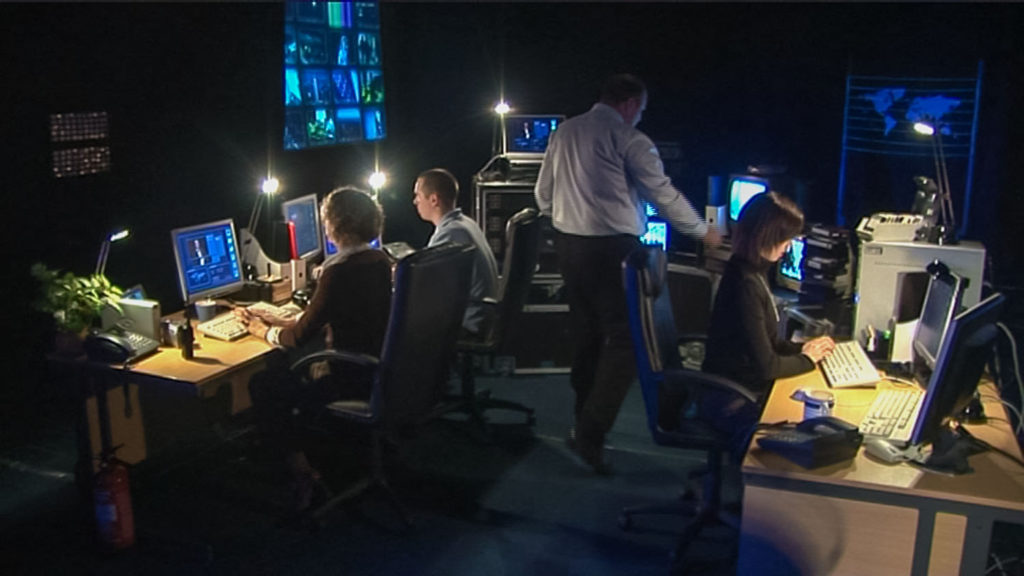 On Saturday, I was up at 7.30am to get the videos for the computer screens finished, and then headed over to Bolton for midday to start putting the set together. We started with an empty white-walled room, so had to totally transform it to look like a surveillance control room, and I don’t think we did too bad a job to be honest!

As is always the way, we didn’t get to start filming as early as we’d have liked, so we didn’t get all of it done until about 3am! And then after everyone had gone, me and James had to de-rig the whole thing which took us about three hours (it probably would have been quicker had we not been so tired!!) I eventually got back home at 7am on the Sunday morning, making it a 23½ hour working-day! I managed to grab a few hours sleep before we had to film the introduction section later that afternoon.

So all in all, a productive – but incredibly tiring – weekend!

Well, tonight I had my official MUTV leaving do, in which I’d decided to go bowling rather than the more traditional route of just going to the pub for the night!

Anyway, we met at Duke’s 92 in town, and it was a good turnout… to be honest, I was kind of worried about how many people would actually come. It was a bit weird though, because I really do feel uncomfortable if the attention is put on me, and this was one occasion where it was difficult to get out of that! While we were there, I got given a card, a HMV voucher and a book – “The Bluffer’s Guide To Football”… though I kind of feel that it may have been more useful six years ago!!

Then 15 of us went down to Parrs Wood to the Megabowl for a couple of games of bowling, and it was quite good fun, and it looked like everyone who went enjoyed it. By some kind of miracle, I managed to win my first game…

…but almost came last on our second!! Strangely enough I don’t have those scores!! Ian did a heck of a lot better though, coming either first or second!

There are photos of the night here.

First day of the new year, so the obligatory blog entry…

Well, I suppose the major thing in my life now is that I’m technically unemployed! It was my last day at MUTV on Friday, although I’ve been in this weekend to clear my desk, and dub off some of my old work. It feels a bit weird… I don’t think it’s quite sunk in yet. I’m pretty busy with doing this year’s opener for the IR Awards at the moment, but after that I don’t really have any definite work lined up! Now that’s quite scary!

Christmas was a bit of a non-event really, although it was certainly wasn’t anywhere near as bad as last year, which definitely was the worst I’ve ever had.

I had to do some stuff for the IR job which meant I was dubbing tapes all the way through both Christmas Eve and Christmas Day, as well as converting some footage from US NTSC to UK PAL which took forever! Then on Boxing Day I went into work to get some bits and pieces that needed doing sorted. And then last night I was in the office, and got home about quarter to midnight, so that was how I saw in the New Year. Whoopee.