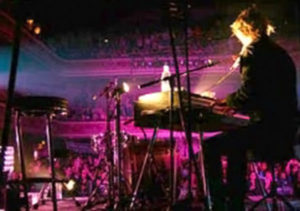 Well it’s my birthday today, and I’m at work! Woohoo!

But last night was a little better anyway… went to see Delirious on their World Service tour in Bradford with Sa – and the gig rocked!!

We got there quite early so grabbed some food, then met up in the theatre’s bar with Caroline and a couple of her friends who were also there – but they had tickets for up on the balcony, so we all grabbed a quick drink before we headed down to the main floor for the gig. They were really good – it was quite a different atmosphere from when we saw them back in January… it was certainly a spectacular show! The support act – RRWC – were also pretty good, and impressed me enough for me to buy their CD (which I even got signed by the band, even though I didn’t know who any of them were!!)

There was quite a funny moment when a couple that I know from working at Spring Harvest – Emma and Iain – were called up onto the stage to do a slow dance whilst the band played ‘What Is This Thing Called Love’!

So all things considered, it was a totally brilliant night!

Anyway, back to my birthday… I’m so happy to be officially a year older!

Prezzie wise, got a bit of cash from family, and a really cool T-shirt from Miss Wallace, so not too shabby really!