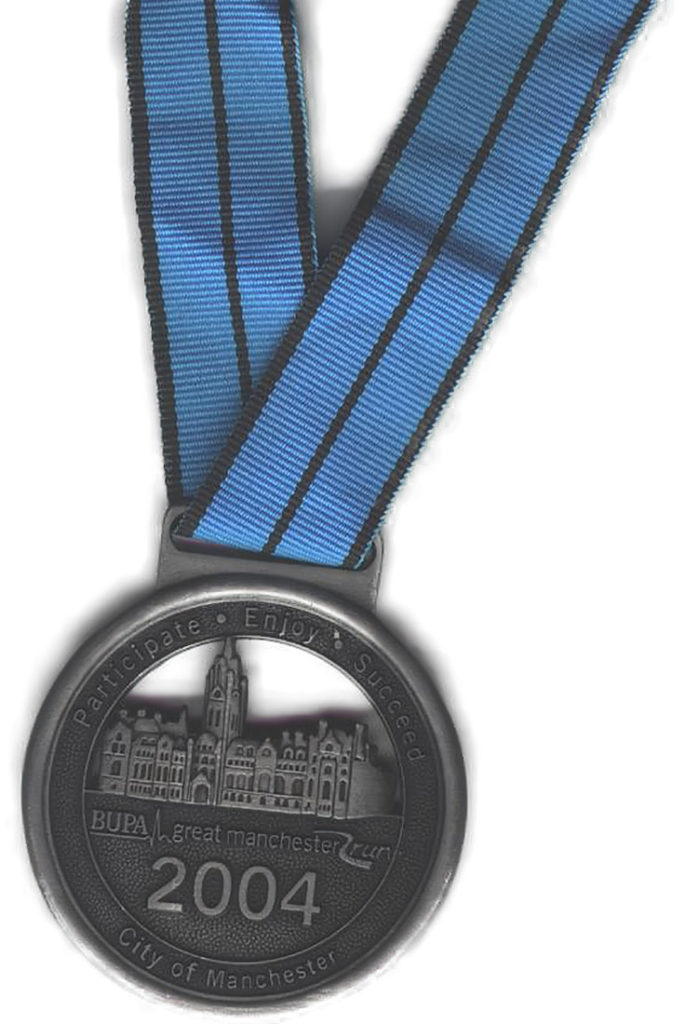 Well I did the Manchester 10K run yesterday! It was a boiling hot day which wasn’t ideal for running, but I completed the course in 1hr14m24s which I’m well chuffed with, because I was really expecting my time to be between an hour and a half and two hours!

I met up with Mike from work first thing on the morning, along with his fiancé Claire and her mum, and we all walked over to our meeting point on Portland Street to get ready for the start. Everyone was doing some kind of workout on the street, but we couldn’t really see the people leading it so we just kind of did our own stretches and stuff to warm up. Because there were about 16,000 people taking part, they’d split everyone into 3 ‘waves’ so they could start people at different times, so as we were in the ‘slower’ group, we were last to set off. I crossed the start line in St Peter’s Square at about 10.30, and started off and a steady jog down Quay Street, around the Granada building and then back up towards Deansgate. It was as we joined onto Deansgate that we were able to see some of the really good runners crossing the finish line – which was a little disheartening, knowing that there was still about 8km to go for us!

Anyway, I kept going at a reasonable speed until 3km, then decided to switch to a fast walk to get a bit of energy back, and then from the 4km mark switched between jogging and fast walking so that I could pace myself through the whole thing. I reckon I probably only walked about 3km of it really, so I’m quite pleased that I did run for a lot of it. If I do it again next year, I reckon I could improve on my time quite a bit if I can build my stamina up and try and keep at a constant speed all the way round.

After the run, I met up in town for a drink with Sa and Emma who’d also been running – they were slightly better than me(!)… they both did it in 56 minutes, and I was well impressed with that! We grabbed some lunch and chilled out in Exchange Square for a bit, which was was packed with people enjoying the sunshine, and then somehow I ended up trawling round loads of shops with them around Manchester city centre – luckily I didn’t spend too much though!

When I’ve managed to get all the sponsor money in, I reckon I’ll have raised over £300, which is pretty smart, and makes it all quite worthwhile – especially since I can hardly walk now!!

I now have smooth walls in my dining room! The plasterers finished it all this afternoon, and I’m hoping that it will have dried out enough by the Bank Holiday weekend so I can get painting it. The carpet is totally trashed though – covered in plaster and stuff! I was planning on changing it anyway – but now I’ll have to do it a bit quicker!

Went for a run up to Parrs Wood last night. To be fair, I probably only actually ran about half of it – the rest was more of a fast walk because my foot was hurting a bit – and I worked out that I did about 4 miles… that’s nearly 6½ km, so it’s on the way to the 10K on Sunday! Can’t believe it’s only a few days away – it’s going to be so hard! Think I’m going to try and run a bit tonight as well, although the later it gets, the less enthusiastic I am. If I can get out before half eight…

Music first then… last Wednesday night I went to the Roadhouse in town with Sarah, Emma and Caroline to see Stoney Lacuna do a gig, and they were really good, and we had to listen to two other bands playing before they came on. So that’s three down, three more to go…

Then on Saturday, a few of us went to Alton Towers for the day, followed by a gig in the evening with a gospel group called Sinai, singer Rebecca St James, and headlined by Delirious. The theme park was cool – but massive queues though.

Didn’t get onto the biggest rides because the wait was over 2 hours, but still got onto some good ones. The concert was great, although it was quite an experience being in a 12,000-strong mosh pit!!

I’ve been doing quite a lot of running at the gym, but I went running outside for the first time yesterday afternoon. Jamie drove us out to a village in Derbyshire called Mellor to do about an 8km circuit that he normally does on his mountain bike… so as you can imagine, it was quite hilly! We managed to do it in about an hour and 10 minutes with a mixture of running and fast walking. It’s so much harder running outside than in the gym, you really feel it on your feet running on the road. One thing that is quite a worry to me is that after a while my toes went really numb, then just became very sore on every step. Don’t know why they’re hurting like this, and could really do with that not happening this Sunday! Have decided to take a break from running for today, but will be going to the gym tomorrow. I’m getting my dining room replastered on Wednesday and Thursday, so my plan is to try and get out and do a run somewhere near to home at some point during those days.