Just been and bought some proper running shoes today – Saucony Grid Omni 3 CRM Moderate trainers… so I should be amazing in the Manchester 10K now(!)

Worryingly, it’s just four weeks away, and I’ve still not done any proper training because of my foot, although I have been to the gym a few times over the last couple of weeks, and of course there was the walk last weekend. The pain in my foot has eased quite a lot now, although if I twist it it still hurts, but hopefully these new trainers should support my foot well when I’m running.

My plan now is to try and do some running pretty much every day up until the event now – and that’s going to take a lot of will power, especially when I’m feeling tired! I think I’m going to try and go out somewhere tomorrow and do a bit, then split it between gym and road for the next four weeks. Can’t wait!

It’s been a pretty busy weekend. Yesterday, because it was Dave Cieszynski’s birthday last Sunday, a load of us drove up to the Lake District to go for a walk up Scafell Pike – England’s highest mountain. There were 19 of us that went on the walk, and the drive there was a bit of an adventure in itself! I left Manchester at about 7.15am, and once we got off the M6, ended up on some very steep and narrow roads – my poor little Fiesta didn’t know what had hit it! After getting a bit lost, we eventually arrived at Wasdale Head at about quarter to eleven, which is where we set off from to start the climb.

The weather didn’t seem too bad – quite sunny, but not particularly warm, although the walking certainly warmed you up! But as we got further up, it got loads colder, and incredibly windy. I had one nightmare section which we had to do – there was a rocky section that we had to scramble up that did scare me quite a bit. It was quite steep and narrow, and I was struggling to find places to put my feet on, and rocks to grab onto that didn’t move! My other major concern at this time was that even if I did manage to get up this bit, there was no way on earth I was going to be able to get down the same way!! So when I got to the top, I was pretty relieved to hear we were taking a different route down! 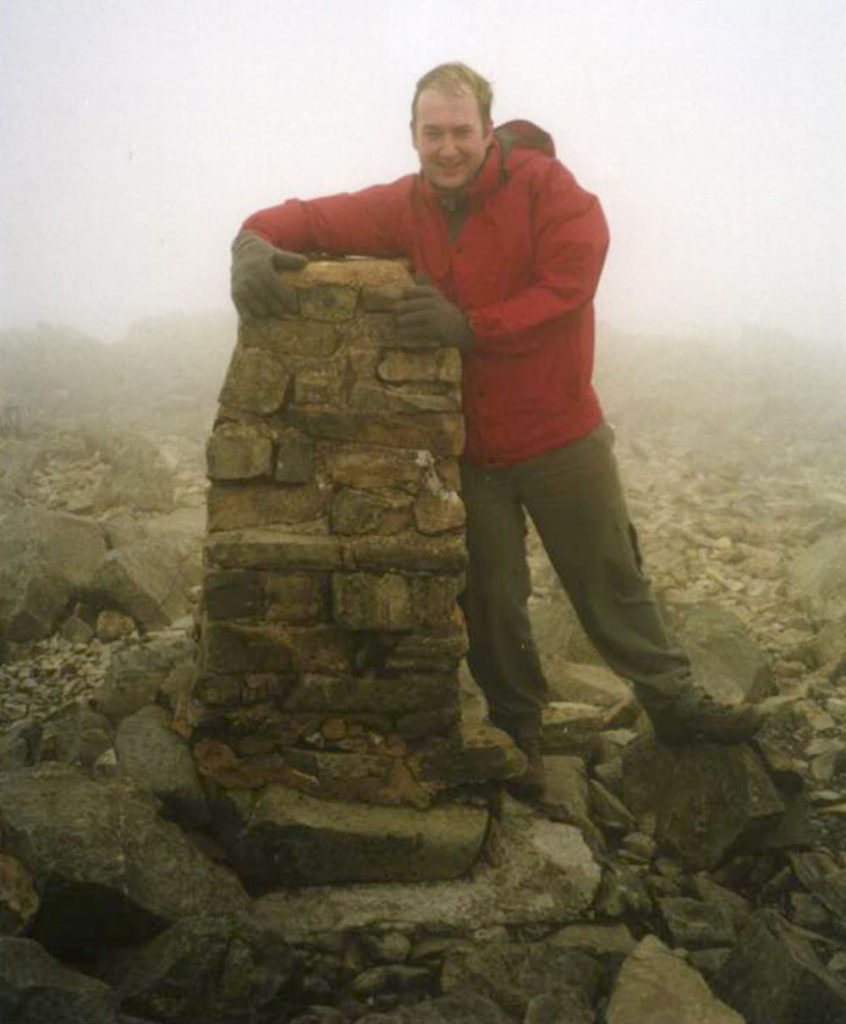 As we made the final ascent to the summit, we entered into the cloud, and had to walk over loads of stones and rocks – and by now the wind was really strong, and I got knocked off the rocks a few times, which wasn’t great for my dodgy foot! At the very top, you couldn’t really see very far at all because of all the cloud, and it was absolutely freezing! And it was almost impossible to stand up for long without being blown off balance.

So after about quarter of an hour or so at the top, we started back down, and it was harder than I expected, because we had to negotiate ourselves over some pretty rocky ground, and my foot by this time was starting to hurt quite a bit! And then, as we were walking down the last section, both me and Dave got cramp at exactly the same time as we were on this steep section of grass, and the two of us collapsed on the side of the hill in agony! I manage to drag myself back up to the main path, and the cramp kind of passed, but by now my knee which I injured skiing felt like it had turned to jelly – I seemed like my body was totally falling apart! It was at this point that the heavens opened and torrential rain and hail came down on us, so by the time we got back to the cars, I was totally drenched through, so we headed to the nearby pub to dry off and get refreshment!

If you want to see some photos from the walk, there’s a load of them here.

Then this morning I had to be up pretty early this morning to get up to Middleton for Colin & Caroline’s daughter Olivia’s dedication service. Both Emma and Sarah are Godparents, and Ben and Kristy were also at the church for it, so I sat next to them, which was cool. Went back to the house afterwards for a bit of get-together, and the place was over-run by babies, which was interesting! I think I handled it quite well considering my lack of experience! All in all, it was a really nice day, and wrapped up a great weekend – although I can feel the aching in my legs starting to kick in now… I need to do a lot more walking this year I think to get myself a bit more conditioned to it!

Last year I climbed Snowdon – the highest mountain in Wales, Scafell Pike – the highest in England… so all that’s left now is Ben Nevis. Bring it on!

I’ve had the whole Easter weekend off work, and it seem like absolutely ages! Probably because I’ve managed to get a lot done with the house. Jamie came round on Friday and Saturday to help with doing some DIY stuff, and I’d have got nowhere near as much done if he hadn’t been here! We basically did some work on my dining room, and bricked in the old fireplace, boxed in all the pipes, moved the ceiling light so it’s now over the table, installed some spotlights, and added some extra plug sockets in there! The only hiccup was when we added the extra mains sockets – it looked like there was an old spur cable of the socket we wanted to link from – and we checked all over to make sure it wasn’t going anywhere, so we just cut that and used it for the new one. Brilliant… until the next morning when I went to run some hot water for a wash… and no hot water! The realisation soon kicked in that that cable that seemed to make no difference whether connected or not was actually powering the boiler for my central heating!! I left it until the this morning to fix because I went for lunch yesterday with Jamie and Ryan, and didn’t get home until pretty late. So I got the boiler working again this afternoon, and have now also built a new bottom step for my stairs, after taking out the old one because it was far too big, and the wood on it had split anyway. So I got loads done on the room, and it’s not too far off getting someone in to plaster it all… then it’s just the finishing touches!

The only other thing I’ve done this weekend is that I went to see The Passion Of The Christ yesterday morning. I know it’s been out for a while, but it been the first chance I’ve had to see it. I wasn’t quite sure what to expect because of all the hype around it – but I wanted to make up my own mind about the film. I guess was suprised at how much the fact it was subtitled throughout didn’t bother me at all, and visually it was stunning. There were one or two bits that I thought weren’t quite right, but have made me think about stuff. And the portrayal of the violence wasn’t as bad as I thought it might be. I guess that’s more of a reflection of how we become desensitized to things nowadays, but I think it was more that the violent stuff was pretty much never-ending, so I guess the shock is the amount of it rather than the level of it as far as I was concerned. But all in all, I thought it was a really good film.