Spent the weekend down in Kent, meeting up with some of the guys from the CU when I was in Birmingham – Bin, Russ, Jon, Eve, Rho, Pres and Ginge. It took absolutely ages to get down there – I left at 8pm from Manchester and got to Pres’ house in Paddock Wood at half one! I thought the motorways would be better at this time of night, but no chance! On the M25, I was at a total standstill at 11.30 – you just can’t win! 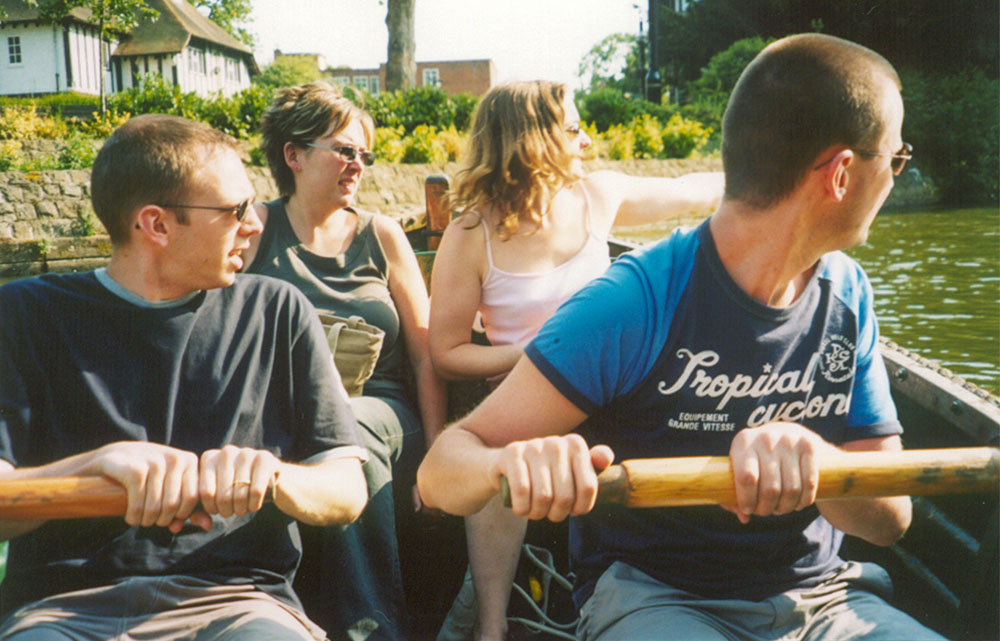 Anyway, following a good night’s sleep (after watching a tape of that night’s Big Brother!), we went over to Tonbridge for lunch, and then went rowing around the castle’s moat! It has to be said that we weren’t really the best of rowers… we all took turns, and ended up in the bank many times, and also came perilously close to some big boats on a few occasions! I had a go at rowing on my own nearer the end, and that was a bit easier to control than pulling on just one oar… but I have definitely decided that sitting on a rowing machine in the gym is a lot easier to control – even if loads more tiring!!

The weather was gorgeous – in fact I got a bit burnt – so that’s my summer tanning completed then! In the evening we had a barbecue which somehow I pretty much got out of doing! Actually it was my second barbecue of the week having been to Jamie’s lifegroup one on Tuesday night, so I was getting quite used to burnt sausages and burgers by now!

Sunday again was really sunny – so we just sat out in the garden taking in the rays! I left just before 3 o’clock, and this time it only took me 4 and a half hours to get home, getting back to Manchester at half seven… arriving late for a quiz night thing Reach were doing at Jabez Clegg! I joined Dean’s team and they actually won(!), even though I came in half way through, and could answer hardly any of the questions! Oh well.

Have a look at my photos of the weekend here.

Spent all yesterday down at Old Trafford filming a soccer school and tournament to make a promotional video for Manchester United Merchandising. Luckily the weather was pretty good, so it was nice working outside! It was a bit of a celeb-fest as well, as there was a team of TV bods in the tournament, and they ended up winning the whole event!

Time to do a bit of name-dropping here… there were a few ‘celebrities’ that I didn’t recognise at all, but the ones that I did were Ralf Little, Will Mellor, James Nesbitt, Harvey from So Solid Crew, Andy Whyment and Alan Halsall (Kirk and Tyrone from Coronation Street), Michael Grecco and Judy Shekoni (Beppe and Precious from Eastenders), and some Brookie guys whose names I don’t know! It was a pretty long day though – I ended up doing 11 hours yesterday, so I’m going to try and get some time back today. We’ll see if that actually happens!

Spent part of last week in Portugal which was really nice! I flew out to Lisbon on Tuesday night, and got back to Manchester late Friday afternoon. However, it wasn’t really a holiday… I went out there with Paul from work to give a presentation at a distributer’s conference for Digital Vision, who supply MUTV’s music.

The conference took place on the Wednesday, and we had to give a 20 minute talk on how we use their music in our programming, and we used a mixture of Powerpoint stuff and video clips of our output. We then had all Thursday and Friday morning to ourselves, but I took a DV camera with me to do some filming in Lisbon because Manchester United are going to be playing Sporting Lisbon in a pre-season friendly in August, so the stuff I managed to get should be some use when I’m making promos.

The place we stayed in was amazing – it was all paid for by Digital Vision, so we were put up in a 5 star hotel – which unsurprisingly is something I’ve never done before! It was like a stately home – nothing like a Travel-lodge! And you did feel slightly underdressed walking around in jeans and a t-shirt, although I did manage to rustle up a shirt and tie for our presentation!

The weather was really good at the start… the sun was blazing down on the Wednesday (when we spent most of the day indoors…), and then on the Thursday afternoon, it got quite cloudy although it was still pretty hot. But by Friday lunchtime when we waiting to get the plane back, it was raining in Lisbon! And to make matters worse, when we got back to Manchester, it was hot and sunny, and had apparently been like that ever since we left the UK! Typical!

There are some photos of the trip here.