Well the last two weekends have been pretty busy with both taken up by weddings! 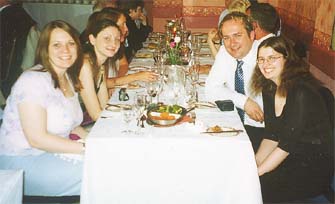 Saturday just gone, I was up in Burnley for Rob and Lib’s wedding. We all met stewarding at Spring Harvest many moons ago, and they’d asked me to be an usher at their wedding, which was a totally new experience for me! And it meant I had to hire a suit as well (I don’t have one ‘cos I never normally need to wear one!)

Anyway, I drove up for the rehearsal on the Friday night after work, and spent the time making notes and hoping that I wouldn’t do anything wrong the next day. On the day itself, everything went really smoothly. The weather was fantastic, and Rob & Lib really enjoyed the whole day. Oh, and slightly freaky coincidence-type thing… Ben, the other guy who was ushering (who I didn’t meet until the Saturday afternoon), lives in Lichfield and works in Tamworth about 5 minutes walk from where I used to live!

It was good seeing the Skeggy guys again so soon after Spring Harvest… Spike, Su and Jude were there, and I also caught up with Lib’s sister Rosie who has also done Spring Harvest. Spike and Su came back with me on Saturday night to stay over, and they travelled back to Hartlepool and London on the Sunday.

There are some photos from the wedding here.

And then the weekend before, I drove down to Lewes near Brighton for George and Hazel’s wedding. I shared a house with both of them the first year I moved away to uni – and I was the most surprised when they eventually got together a year or so later! It’s only taken them nearly eight years to sort it out properly!!!! 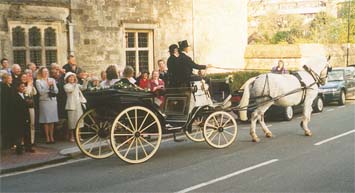 Again, it was a really cool wedding, at the church in which Hazel grew up (since it was her home town!). I met up with Ali and Pete in Hemel Hempstead on the Friday night, and we then drove the rest of the way first thing on Saturday morning. Because it was the Bank Holiday weekend, we had decided to stay for the Saturday and Sunday nights, so we were booked into accommodation right over the local pub! Also at the wedding were Helen Oakes, John & Helen Fuggle, and Sally Westlay (who I hadn’t seen for years!). I met John again a few years ago at Phil Ball’s wedding, and he hasn’t changed one bit! I’ve kind of sporadically kept in touch with Helen, Ali and Pete – but I am pretty useless at keeping in touch with people properly!

After the reception, me, Ali and Pete drove across to Brighton – which is a pretty interesting place! It seems to attract all th UK’s stag and hen party crowds, as well as loads of clubbers and students! We went on the pier, and I wasted a few 10ps in those arcade things with the sliding shelves where no matter how much money you drop into them, that ledge of cash balancing over the edge never falls!

Sunday was a pretty chilled out day – went to the church in the morning, and had a pub lunch afterwards, then we met up with all those that were still around from the wedding (including George & Hazel!) for a cream-tea… which was good!

Sunday night saw a return visit to Brighton seafront – this time Helen came along with us as well – and we all watched fireworks from the pier, and also bought some pretty useless souveniers!