Yet another mad Monday night… 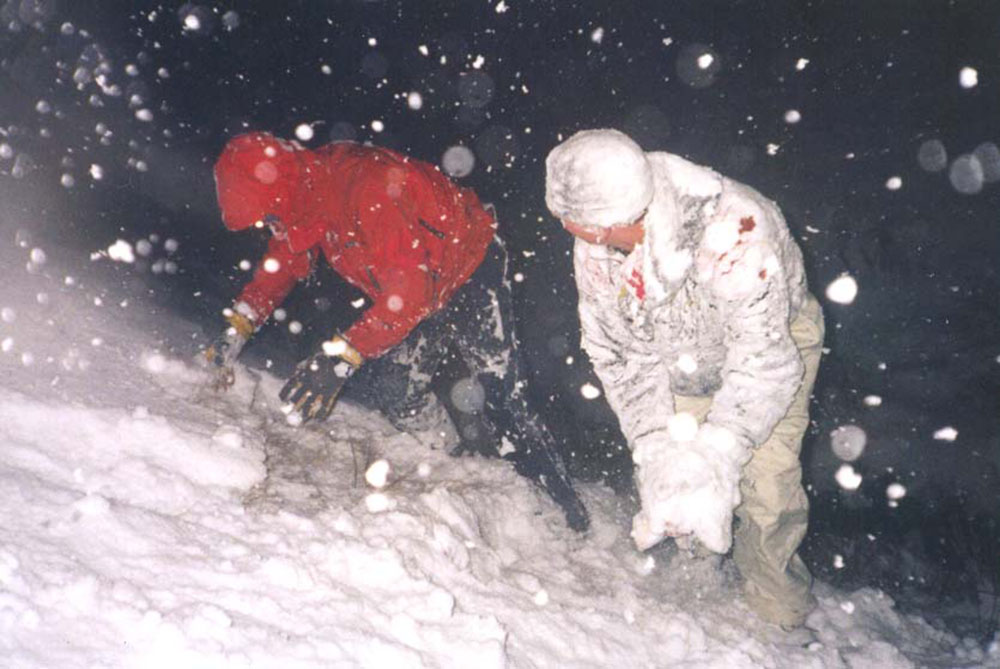 I got back from work yesterday evening at about nine o’clock, just as it started snowing. I didn’t think it was going to settle, but by eleven o’clock, it had really set in. Now I’m not saying I’m easily led or anything (!) but Jamie got all excited about this sudden bout of wintry weather, and decided that he wanted to go sledging and for some reason I agreed to go as well!! So at about midnight, Jamie was driving me, Dave, Andy and Fran up towards Glossop and the Snake Pass which leads to Sheffield. Now to be honest, the Snake Pass is a bad enough route in regular conditions, but hey, here we were heading up there in blizzard conditions! We started up the windy road up the Pennines (going round a ‘Police Accident’ sign that was blocking the bottom of it!), and I was a tad nervous as we headed towards the top – mainly due to the low visibility from the heavy falling snow, and what was effectively an ice rink below us with a major drop to the side of the road!!

We passed a couple of abandoned cars on our way up there, and when we got to the top, pulled over in some kind of lay-by which looked pretty much like the rest of the landscape – ie, white! We got out of the car, and it was ABSOLUTELY FREEZING!! I’d borrowed a hat from Jamie, and was wearing two t-shirts and a jumper under my big coat, plus some pretty thick gloves, but still my teeth were chattering! It was quite weird actually, because although there was no light up there apart from our torches, and the blizzard was stopping you from seeing too far in front of you anyway, the whiteness of the whole area allowed you to see even with the torches off!

So we started walking down the Snake Pass through the snow, pushing a make-shift sledge down the main road! Andy managed to drop into a ditch off the side of the road which gave us some amusement, and we passed a car that had rolled off the road into a pit of snow, which re-ignited my concerns of us driving back down to go home later! Anyway, we found this field with a really steep bank which went down to a stream that was ideal for sledging and spent quite a bit of time up on there. I only went down the bank once because I was mainly taking photos, and it took ages to get back up because the snow was so deep, and I kept slipping back down the hill! At least I didn’t end up in the stream at the bottom – that honour goes to Jamie!

You can see the photos I took here – some aren’t the best because the conditions and visibility were so poor, but you get the general idea!!