Not that much more to report at the moment! I’m settling into the new house pretty well – I’ve smashed out most of the massive fireplace that was in the living room, but stopped short of totally removing it when it wasn’t totally clear whether or not the wall is being supported by the bricks that I was carefully removing! So I now have a really nice looking feature as soon as you walk into the house! 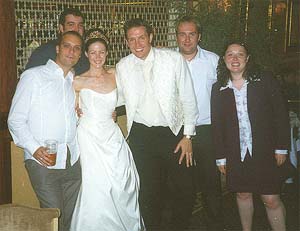 Had a good day at Steve and Claire’s wedding but it was very tiring. I was shooting pretty much solidly from about 12pm until about 10pm! There are some photos that I managed to take when I wasn’t doing the video here! And a few of the shots that I took of the ceremony made it onto the end of Midlands Today the next night which was pretty cool!

Went down to Bin’s housewarming party down in London the other weekend and it was a pretty mad night! It took hours to get down there ‘cos of engineering work on the railways, so I had to do part of the journey by coach. Jon & Eve were there as well, and there were quite a few Sheffield guys who I’ve met at previous parties when I lived in Birmingham.

It was my sister Vikky’s 21st birthday on Tuesday, so I was down in Tamworth for a load of us to go out for a meal. Was quite a whirlwind trip, and drove back up to Manchester the same night – but had to pull in at a few service stations on the way just for a bit of a rest ‘cos I was so tired! It’s my birthday in a couple of weeks but I’m not looking forward to that event at all – the number is getting too big!!

I’m off to Rhona’s party down it Tottenham this weekend. It’s a Bollywood Bash, and she wants people to go in Bollywood costume! I’m kind of thinking I might conveniently forget that bit of it, and go in normal clothes! I think quite a lot of uni guys will be there as well, so that should be good catching up with everyone.